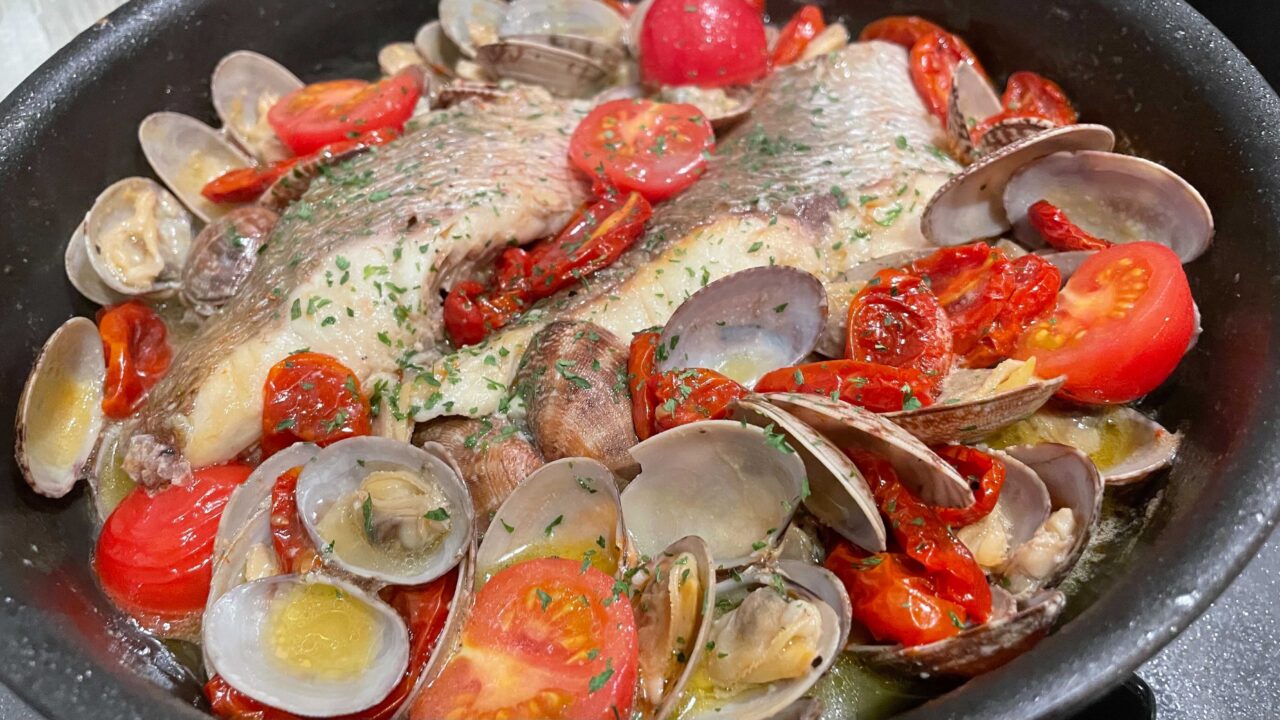 I thought I wouldn’t use the dried tomatoes I made before, so I decided to cook aqua pazza for the first time in a while, so I’ll leave the procedure briefly.
Ingredients are easily prepared at the supermarket, so I think it’s a good idea to cook them for lunch or dinner! Click here for an article on how to make dried tomatoes.

I use fish fillets and clams like this. It is usually sold to supermarkets. You can change the fish to your liking, or you can get it at the supermarket! Sprinkle salt evenly on the fish and season it. Wipe off excess water with kitchen paper.
If you can remove the bones and scales at this stage, it will be easier to eat if you remove them. If you try to force it, fish meat will collapse, so it is better not to overdo it. Next, I will bake the fish. Add olive oil and seasoned fish in a hot frying pan.
Bake from the lenticel.
If you don’t have bones, fish meat may bend down. In that case, hold it down with a spatula to prevent it from bending over.
Especially for the lenticel, it will be delicious later if it is baked well. If you lightly press it with a spatula, you can make a crispy and firm grill. Next, stew the ingredients. Add enough water to soak the fish fillets. This time, the water when the clams were thawed seemed to be delicious, so I put it in. At this time, add the clams together and simmer.
Occasionally sprinkle the soup with a ladle so that the soup is applied to the whole fish and clams. I didn’t take the lye because it was troublesome this time, but if it’s a fresh fish, I don’t think it’s necessary to take it (if you’re interested, take it). After boiling, add the dried tomatoes here. Maybe because of the sugar content of the tomatoes, it hardens while I put it in the refrigerator, but I don’t mind putting it in! Also add a little olive oil. Stew again with a ladle, occasionally sprinkling soup until the water is reduced. In my case, I wanted a refreshing taste, so I put ordinary undried tomatoes before turning off the heat and stewed them a little.

Finally, if you want a little accent, add pepper, and if you want to make the color beautiful, sprinkle with parsley and it’s done! 4. Put spaghetti at the end! It’s done!
I also add a little parsley for coloring.