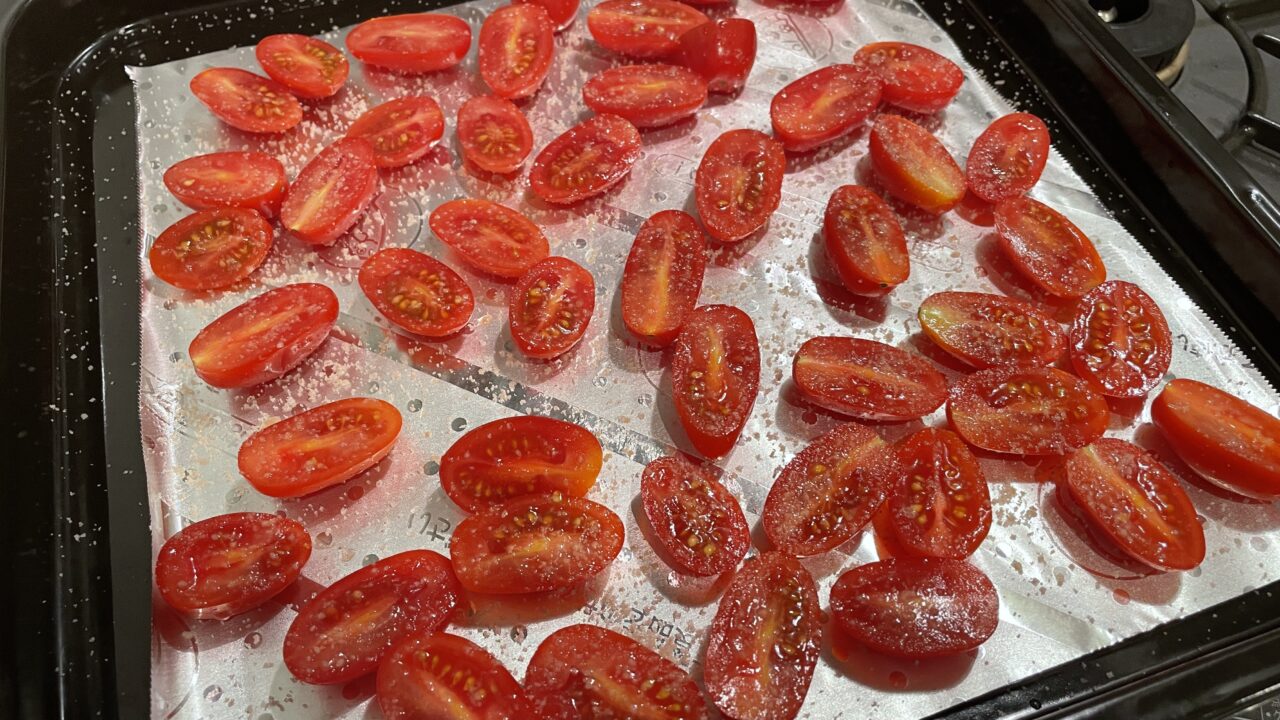 Lots of tomatoes that can’t be used up!

After covid-19 pandemic, I’ve been at home for a long time, and Sugiy’s desire to cook has become stronger recently!

Suddenly, tomatoes are delicious, aren’t they? Besides, it’s good for your health, so you’ll want to eat a lot.
However, tomatoes hurt quickly, so if you have a lot of them, it is a difficult vegetable to store for a long time. I always buy mini tomatoes in a pack like this at the supermarket, but this time we had multiple opportunities to eat out, so it seemed that we couldn’t consume all of them, so we used these mini tomatoes as dried tomatoes. I thought I’d try it! What are the benefits of using dried tomatoes?

Cut the cherry tomatoes in half and line them up on the top plate of the oven with kitchen paper, etc. with the cut end facing up.
Since the cherry tomatoes this time were elongated, they were cut vertically so that the cross-sectional area of the cut end was wide. This is easier for moisture to fly. In the photo, we use foil, which is used when grilling fish.
Next, sprinkle salt evenly on the spread cherry tomatoes. By the way, this time, I am using a salt called algae salt as a trial. I like it here!

Algae salt is salt from seaweed. It has a slightly pinkish color.

Compared to ordinary salt, it has a low salt concentration, so it has a mellow taste.
It is also recommended to simply sprinkle onigiri, meat, fish, tofu, etc. and eat it!
Depending on the supermarket, in Japan, you may be able to buy it at the salt corner, so please try it once!

Bake in an oven preheated to 130 degrees for about 80 minutes. The heating time depends on the size of the tomatoes, so adjust while watching the situation. If excess water remains on the tomatoes after baking, wipe them off with kitchen paper and bake for an additional 20 to 30 minutes. ↑Acclaimed mini tomatoes are being heated。。。

Take it out of the oven and leave it on the top plate in a well-ventilated place until the moisture is removed.

Tomatoes that are not used immediately can be stored for less than a month by soaking them in olive oil and storing them in the refrigerator. Since it’s a big deal, I’ll use half of the dried tomatoes I made for cooking as they are, without soaking them in olive oil. This time, I decided to make fried rice, considering the ingredients left over at home. I will briefly describe how to make the fried rice I made this time. The tomatoes themselves go well with Chinese food (personally, oyster sauce), and unlike ordinary tomatoes, they are dried tomatoes, so the fried rice does not become sticky due to moisture.

The rest of the dried tomatoes pickled in olive oil will be eaten in aqua pazza!

Today is up to here~

Let's check how to use AVPlayer!